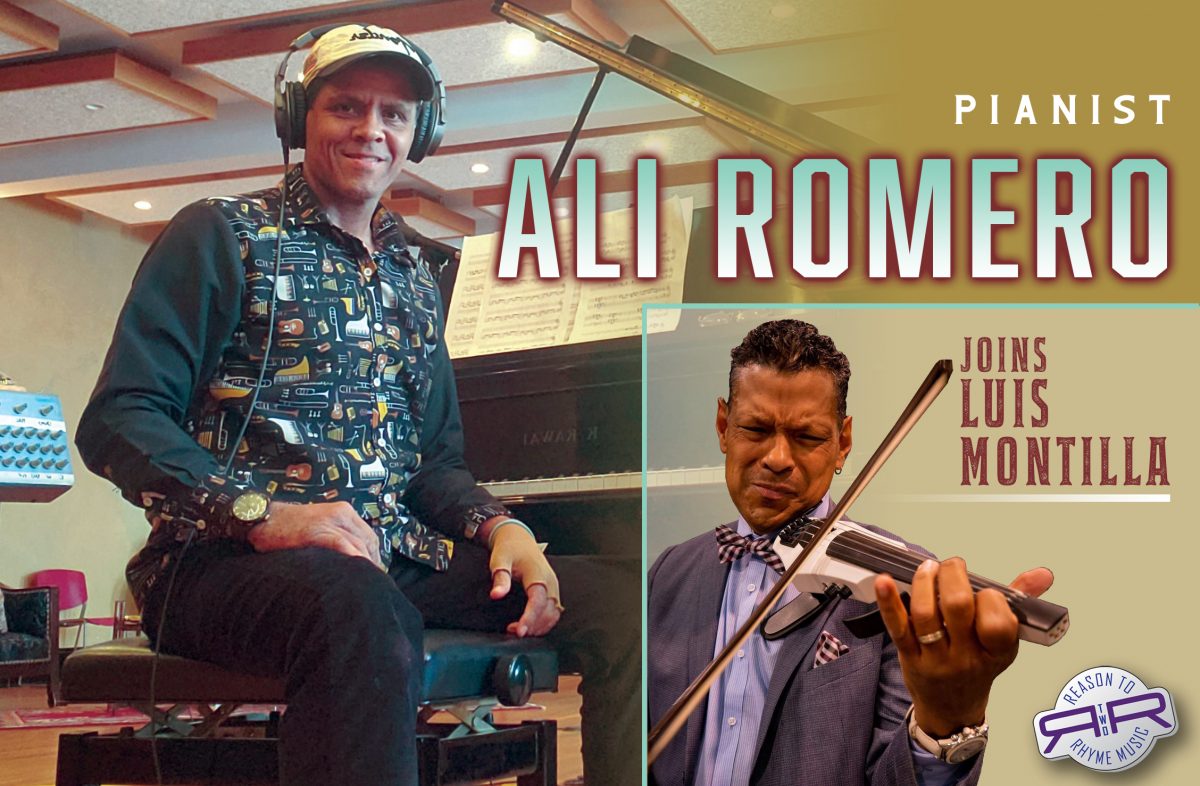 Like all families, a band is a union formed by love — a love of music, in this case. That’s what it was like when piano player Ali Javier Romero was hired as a session musician for Luis Montilla’s “The White Violin” project.

“I was asked to play with him,” Romero said. “I was surprised that everyone had great confidence in me. Bryan (Wagstaff), Chris (Wright) and Luis all were very kind and cordial. It’s a dream opportunity to play at such a high level with international musicians, including other Venezuelans. We had very good chemistry, and it gave me confidence. I wanted to give my best, and I think you hear it on this recording.”

Romero is a middle school Spanish teacher by profession. He graduated from Universidad Pedagógica Experimental Libertador with a bachelor’s degree in Education and a Master’s Degree in Guidance Behavior.

He never lost his passion for music, though. He still enjoys performing live with Latin bands across North Carolina, South Carolina and Georgia. In addition to teaching the Spanish language, Romero enjoys sharing his musical and cultural heritage with those around him. So working on Montilla’s project was especially gratifying to him.

“It has a special meaning for me since I joined other Venezuelans in this project to inject something of our essence and identity,” he said.

Romero did not know Montilla before working on the album. But his fellow countryman said something to Romero at the outset that put him at ease with the project right away.

“The first thing he said to me when I met him was, ‘I want you to give your heart to this recording,’” Romero said. “So it was, I got fully involved during those days and the result was a quality product that everyone can enjoy when it hits the market.”

Before starting his teaching career in 2002, Romero was an accomplished musician. His musical influences began at home in Caracas, Venezuela, where his father was a widely respected harpist. He taught Ali to play Cuatro, a small, four-stringed Venezuelan guitar. Ali continued his musical journey with private teachers, learning music theory and piano.

Before long, Ali was playing and traveling with ensembles throughout his home country. He learned a variety of styles, including Latin jazz, salsa, merengue and folk music.

His versatility led to greater international exposure when he joined Miami Band. He toured the United States, Ecuador, Nicaragua, Guatemala and Puerto Rico. From there he began composing and conducting, as well as performing with other Latin bands. He played at many prestigious events around the world, including Cuba and India.

All of the traveling and performing enhanced his versatility. He continues to combine that versatility with his experience and passion to make music that people everywhere can dance to and enjoy.

As he reflects on his time in the studio with Montilla, his memories are filled with another family trait — nostalgia.

“Every day I am thinking of it nostalgically,” he said. “It was a creative process. Montilla was the arranger but gave us liberty to do what we wanted to do. He said the percussion and piano would be the element for giving the Latin flavor. I did my part to make them happy with the results.”  He said he relished the opportunity to record with like-minded musicians. And, like all good families, he hopes it’s a long-term relationship.

“Being able to record the pianos for Luis Montilla’s album is a privilege since he is an extraordinary composer, arranger and violin player,” Romero said. “I would like to continue being part of the Luis Montilla and Reason 2 Rhyme projects.”