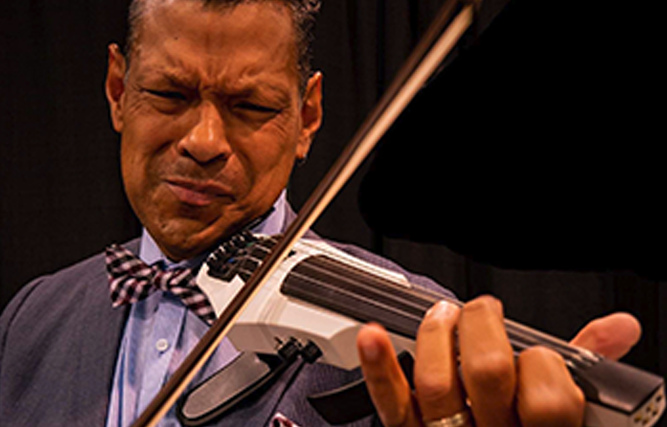 Luis Montilla was born in Maracaibo, Venezuela. At 11 years old, he picked up the violin and never looked back. At age 16, Montilla made his first record with Orquestra Chekere.

Luis Montilla is an unassuming and dignified figure when he takes the stage in his faded jeans and suit jacket. It’s his violin that cries for your attention—a slash of white that might have been pulled from a Picasso painting. When he puts bow to strings, listeners fall under the spell of a master—Montilla layers the eerie voice of the violin over the jazz-inspired Latin rhythm into a spell-binding fusion. Luis Montilla is a classically trained violinist, fluent in jazz and Latin music with a unique—for a violinist—ability to improvise. Montilla was born in San Felipe, Venezuela and shortly thereafter moved to Maracaibo, Venezuela where his was raised. He was eleven years old when he found his calling as a musician. At sixteen, he made his first record with Orquestra Chekere. He graduated from Cecilio Acosta Catholic University in Venezuela with a bachelor’s degree in music and a master’s degree in education, then trained at the Jose Luis Paz Conservatory in classical music. It was at the Conservatory that he was introduced to jazz and Latin music and developed his unique style.  Continuing his journey, Montilla moved to Los Angeles, California, where his career blossomed. Luis’ captivating soul, playing style, and virtuosity creates the perfect fit for Reason to Rhyme Music’s vision.
Montilla currently (2021) has been working on his new debut record, under the Reason to Rhyme Music label, featuring some of the most influential and prodigious artists from across the globe including: Jeff Sipe (Aquarium Rescue Unit), Luisito Quintero (Chic Corea), Ali Romero, Zack Page, Jasmiri Romaldini, Marcus Rezak, The Brothers of Brass, and others.
Montilla has performed and recorded with some of the world’s best Artists including:

Luis has produced music for many short films and TV shows: Gordon Glass with Hollywood actor Omar Miller, CSI Miami, 8 Mile, Miracle at St. Anna, and The Express. In 1999, Montilla became the band leader and arranger for Telemundo’s (NBC) Cuanto Cuesta El Show in Los Angeles. Additionally, Luis composed music for Corazon de Campeon, which was nominated in 2014 for a Fox Sports Emmy. Montilla’s 2011 record Come to Me and his 2012 record Horizonte are available on all digital channels.