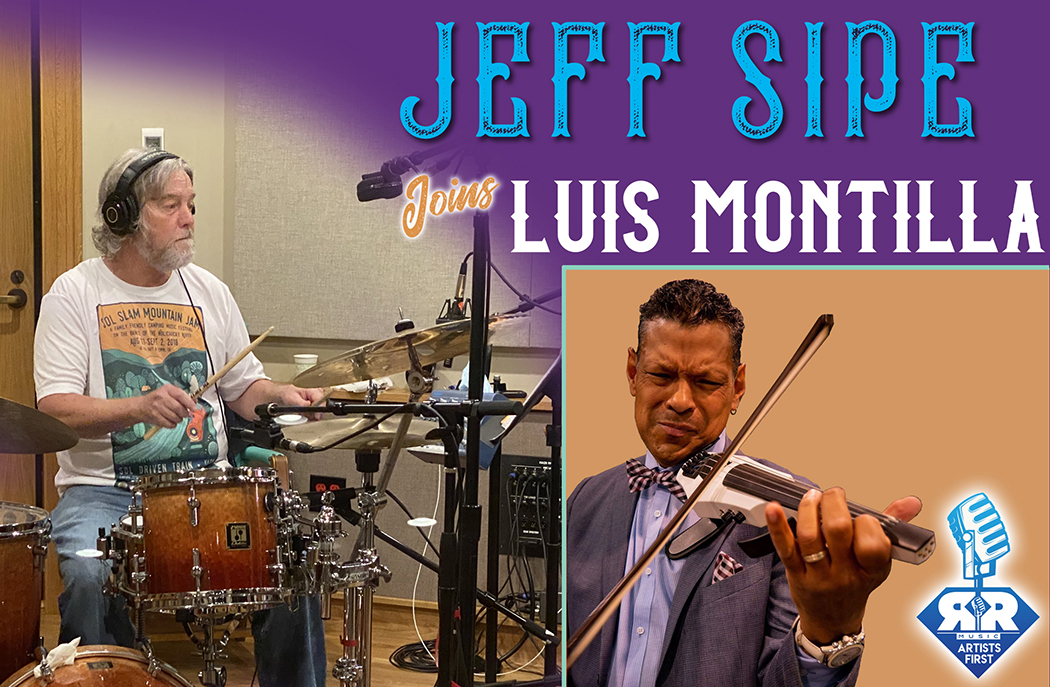 When Jeff Sipe was brought on board as a session musician for Luis Montilla – The White Violin’s project, he knew from the beginning that it would be a labor of love — literally.

“I love the fact that it’s a love album dedicated to his wife,” Sipe said. “With knowing that intention, we could bring all we could to back that sentiment.”

Sipe brought a wealth of experience and knowledge to playing drums on the album. He began playing the drums in sixth grade. He went on to attend the Shenandoah Conservatory of Music and was accepted into Berklee College of Music in Boston, Mass.

“I fell in love with music young,” he said. “It hooked me, and it’s never let go. I’ve been a professional for 50 or 51 years. Early on, I sent out a prayer. All I wanted to do was play, serve the common good and get by. The universe heard me loud and clear. I’m grateful to be here, especially to hook up with these incredible musicians.”

Sipe is no stranger to performing with and being around other talented musicians. He attended Berklee with the likes of Branford Marsalis and Kevin Eubanks. He also formed a band with classmates Baron Brown and Steve Vai.

Jeff moved to Atlanta in 1983, where he performed and taught at the Atlanta Institute of Music.

In 1996, Jeff met Swedish-born bassist extraordinaire Jonas Hellborg and the Memphis guitarist Shawn Lane. This trio toured Europe and America and released four recordings. From there, Jeff dove into bluegrass and performed for three years with Leftover Salmon. The highlight of that period was recording “Nashville Sessions” with Randy and Earl Scruggs, Bela Fleck, Waylon Jennings, Lucinda Williams and others.

Sipe said that wealth of experience, combined with his work ethic, uniquely prepared him to work on Montilla’s project.

“My career has involved a lot of the jam-band scene,” he said. “But I study all forms of music. I am obsessed with practice. I practice all genres, including Latin music. Years of being able to play in improv settings has allowed me to try out all forms of patterns and combos I have been interested in. With Luis, I got to try things I always wanted to try.”

Sipe had never met Montilla before working on the album. He said he wasn’t sure what he was getting into when he accepted an invitation to get involved.

“Chris Wright is an old friend from years ago,” Sipe said of the co-producer of the album. “He called and asked if I was available. I did not know what I was getting into. But anything he’s into is guaranteed to be great. I was just bowled over with the project. It was exotic for me. I don’t get to play Latin music often. It’s a rare opportunity to play it, much less play with such high-caliber musicians.”

Sipe went on to describe what it was like in the studio recording the Luis Montilla project:

“When I work with pros on this level, the top level, I am reminded that the music is No. 1, and everybody’s ego is not present.” he said. “However, everybody is bringing their golden game, because the intention is to serve the music. When that’s realized, everybody can get along. Everybody shares one goal — to make the best music you can in the moment.”

Sipe said the one thing that impressed him about Montilla was his willingness to let each musician bring a little bit of themselves to the project.

“That was very wise and mature of Luis,” Sipe said. “When you are in the heat of the moment, there’s no time to change a player into something they are not. He was willing to go with everybody’s strengths. His wisdom allowed everyone to bring their best to the game, and he celebrated all of us at the same time. He recognized everyone’s potential and, through his own charismatic way, brought out the best in everybody.”